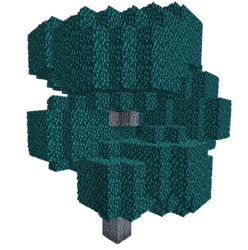 These large trees are found in the Wyvern Lair, and are larger than every tree in Minecraft except for large spruce trees and jungle trees. Tree canopies are composed of Wyvern Lair leaf blocks, and grow several blocks higher than the highest log. The canopy may begin from the ground and go up to 4 blocks from the ground. Tree canopies are generated from roughly spherical clusters of leaves about 5 to over a dozen blocks across, centered on sections of trunk or branches.

Wyvern Lair trees can be chopped down for their wood, which can be crafted into Wyvern Lair wood planks. The leaves can be harvested and used for decoration.