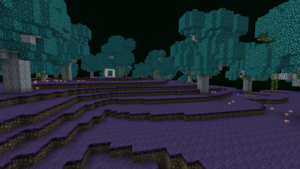 A view of the Wyvern Lair. Many Wyvern Lair trees can be seen, along with the quartz portal in the background.

The Wyvern Lair is a dimension in Mo' Creatures, inhabited by wyverns.

To access the Wyvern Lair, the player must go through the process of obtaining three rare and important materials; a blaze rod, a unicorn horn, and an eye of ender, in order to craft a wyvern portal staff. When the staff has been crafted, it will allow you to enter the Wyvern Lair immediately.

The player can use the wyvern portal staff on the quartz structure in the center of the dimension and they be teleported back to where you were before in the Overworld. Another method involves building a Nether portal in the Wyvern Lair and going into it, doing so will spawn you in a portal in the Nether, go into the same portal will lead you to the Overworld, although this method will not leave you to your original entering point, unlike the staff. 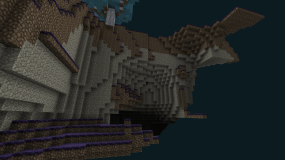 Cliffs and overhangs in the Wyvern Lair.

The Wyvern Lair also has its own type of tree which are much larger than oak and birch trees found in the Overworld. Wyvern Lair trees have greyish-white wood and green-blue leaves. Vines also generate on these trees. There are also small water and lava lakes, which generate both on the surface and underground. 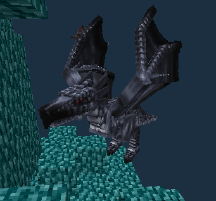 A wyvern, the notable inhabitants of the Wyvern Lair.

The grass blocks are similar to mycelium blocks and have a dark purple color. Wyvern Lair tall grass grows on these grass blocks and also has the same color. Stone in the Wyvern Lair forms the lower part of the island and it has a different texture to that of normal stone. Ores do not generate in the Wyvern Lair, except around lakes of water and/or lava. Other Overworld can be find here, too, such as granite. Most items and blocks function the same as they do in the Overworld, with a few notable exceptions:

The quartz portal is the structure the player arrives at upon entering the Wyvern Lair. The quartz portal is located in the center of the Wyvern Lair. As the name suggests, it's built from blocks of quartz as well as two other types, including pillar quartz and chiselled quartz. The pillar quartz blocks make up the pillars of the structure and the chiselled quartz make up the top. It is the only place where players can get back to the Overworld without making a Nether portal or dying. If you die in the Wyvern Lair, you will respawn in the Overworld and your items will be lost in the Wyvern Lair. The only to retrieve them would be to go back by using the staff.

However, you can use the keepInventory gamerule command so that you can keep your items upon death, that way you won't lose them and have to back to the lair without wasting the wyvern portal staff's durability.

The Wyvern Lair is home to all the types of wyverns. However, there are other mobs that can be found here that are also common in the Overworld, such as bunnies, bats, and snakes.

Like the Nether, the Wyvern Lair is a dark place. It is advised that the player should bring torches and wear a full set of iron, diamond, or cave scorpion armor. The cave armor can help you see effectively in the dark, as you will gain night vision. Dirt scorpion armor can also be worn to gain protection against poison from wyverns.

It is possible to make a Nether portal in the Wyvern Lair. This can be useful if the wyvern portal staff has been depleted or if the quartz blocks have been mined. Once you're in the Overworld, you can craft another wyvern portal staff to get back if desired.

Most blocks found in the Wyvern Lair are exclusive (with the exception of lava, water, mushrooms, and quartz blocks). However, they can be mined and transported to the Overworld.

Naturally generated blocks includes those that are created through the world seed.

The Wyvern Lair is saved in the same way normal worlds are, in the following locations by default:

On all systems, be sure to replace "worldname" with the name of your world.

Note that DIM-1 does not contain its own level.dat; the level.dat in the parent folder is used for all dimensions. This means that even if a player changes the level data in the /world folder for a particular save, the quartz portal will still take the player to the Wyvern Lair world originally generated for that save and vice versa.

Deleting the MoCWyvernLair file will reset the Wyvern Lair, so that all player-made changes and buildings in that dimension will be undone.