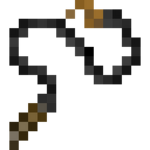 A whip is a tool that can be used to prevent mobs from moving. 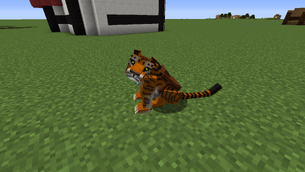 Using a whip on top of a solid, fully opaque block will make fire particles come appear from where the whip was used, giving the effect of the whip being smacked against the ground. A whip has 24 uses, and each use of the whip will consume its durability.

Any tamed mobs within at least a 10 block radius will automatically sit after the whip is used; whipping the ground around the mobs listed below will cause all stationary mobs to begin moving, and all mobs that have not been commanded to sit to remain stationary. Because this will affect multiple mobs with one use, it makes it a much more efficient way to manage groups.

If a whip is used near on a tamed big cat, bear, kitty, manticore, scorpion, or wyvern, it will sit. If used on a tamed horse or ostrich, it will lower its head. Mobs cannot be ridden if a whip is in the player's hand. Using a whip on a mob will not consume its durability, only when its used on the ground.

When a whip is used when riding a nightmare, it will light the ground on fire for a short period of time.

If a whip is used on a horse when being ridden, it will speed up for a short amount of time. If used on a unicorn, it will gain the ability to charge and ram at things. This lasts for about 10 seconds, afterwards the unicorn will move slowly as it recharges.

A whip can be used on a tamed ostrich whilst riding it to give it a short speed boost. Using it on a light ostrich allows it to ram at things in a similar manner to a unicorn.

Both elephants and mammoths will also gain a short speed boost after a whip is used whilst riding it, as well as ram mobs that are in the way.

Since whips are made from big cat claws, if a whip is used near a wild big cat, it will attack you.

A whip can receive the following enchantments, but only through an anvil: