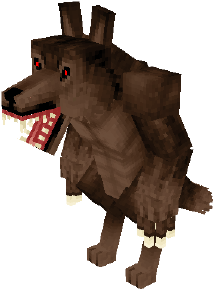 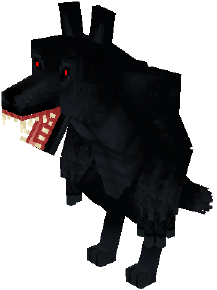 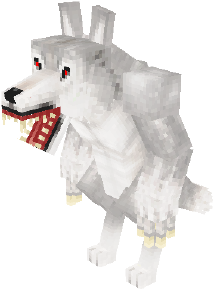 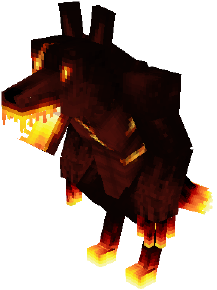 Werewolves are aggressive mobs with the ability to shape-shift.

Werewolves naturally spawn on top of solid blocks in the Overworld in light levels of 7 or less.

Werewolves in human form use one of four different skins. These skins use a model that replicates the stance of players. These skins come with either black, brown, white, or red hair. The color of their hair will determine what color werewolf they will turn into.

In wolf form, werewolves will be either white, black, brown, or have a fiery red texture similar to that of a nightmare's coat.

If killed in their wolf form, werewolves will drop:

Regardless of what form the werewolf was in when killed, they will drop 5 experience when killed by a player or tamed wolf.

A werewolf in human form about to transform. (Click to see animation).

In human form, werewolves will wander around slowly at a pace similar to that of a zombie or zombie pigman. They make shouting or screaming sounds when hit, but they will not fight back if attacked.

When night comes, a werewolf in human form will begin its transformation, and it becomes hostile. Werewolves in wolf form will also wander around aimlessly and howl and growl occasionally.

When the sun rises, the werewolf will revert back into its usual human form again, instead of catching fire like other monsters.

× 20 health points, and are resistant to almost all weapons. Like actual werewolves, however, they have a weakness to silver, and therefore can be killed with a silver sword. All other weapons, including axes, swords and bows, will only deal 1

damage, regardless of their enchantments. Despite this, they are still affected by knockback.

Fire werewolves can set the player on fire for a few seconds after he/she is touched by one.