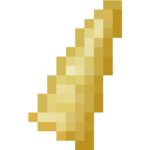 A unicorn horn is an uncommon material item.

Unicorns, fairy horses and unihorned ostriches drop up to 0-2 unicorn horns upon death, all of which have a 25% chance. This can be increased with the Looting enchantment.

A unicorn horn is an important material needed to craft the wyvern portal staff. They can also be used to craft a fairy amulet, but to due to lack of fire as an item, it can only be crafted in mod versions prior to Minecraft 1.8.