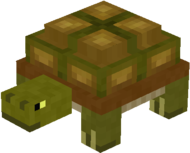 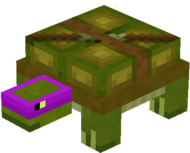 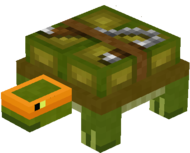 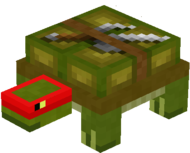 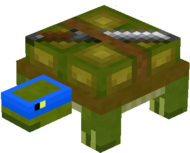 Turtles are tamable mobs that spawn in the Overworld.

Turtles spawn naturally in swampland and jungle biomes. They often spawn in groups of 2 upon world generation.

Tamed turtles can use four different skins if the player names them after any of the Teenage Mutant Ninja Turtles (Leonardo, Donatello, Raphael or Michelangelo). These skins have the characters' weapons on top of the shell, and a headband which can be either orange, red, blue, or purple.

If a turtle has been named after one of the four Teenage Mutant Ninja Turtles, they will drop a special weapon when killed:

A turtle that was flipped onto its back.

Turtles wander around slowly, avoiding cliffs high enough to cause fall damage, and usually stay out of water. If in water though, they will swim and not drown. Turtles will hiss and retreat into their shells if a mob or player approaches them.

Turtles can be flipped onto their back with the use control, and it takes several attempts for them to flip themselves back over. You can get the turtle to flip back up by right-clicking on it again. When a turtle has taken damage, a 'clang' sound can be heard, similar to an anvil placing sound. Turtles are resistant to most attacks if its inside it's shell, so you have to flip it and then hit it afterwards.

To tame a turtle, drop sugar canes or melon slices next to the turtle. The item has to be dropped on the block the turtle is hiding on, or else it won't eat it. You have to then back a few blocks away from the turtle so it can eat it. After it has done so, the naming screen will appear. Tamed turtles can be healed by feeding them sugar canes or melons.

Turtles on the ground will follow the player, regardless of what is in hand. Once tamed, turtles will grow slowly until they reach full size. Unlike horses, a turtle's growth cannot be sped up with food items.