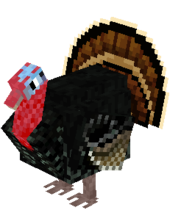 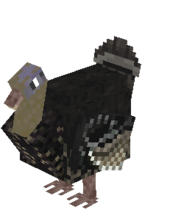 Turkeys are passive mobs that can be tamed.

Turkeys naturally generate on grass blocks at a light level of 9 or more. Both male and female turkeys may spawn together.

A group of male and female turkeys.

Turkeys are passive mobs, and will not attack the player if they hit them, but they will panic and randomly run around after being hit. Turkeys usually wander around, gobbling occasionally. Like chickens, turkeys will follow any player holding melon seeds.

When descending from a height, turkeys will fall rather slowly; slightly slower than most mobs but faster than a chicken or duck. ?Unlike the latter, turkeys can take damage and die from fall damage.

A turkey can be tamed by feeding them melon seeds. After giving melon seeds to a turkey, the naming screen will appear. If you want to rename a tamed turkey, use a medallion, book, or name tag.

Turkeys can be healed by feeding them pumpkin seeds. They can also be leashed. Turkeys cannot be bred, despite having separate genders.