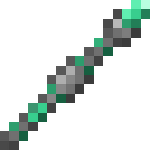 The teleport staff is a tool which can be used to teleport the player anywhere desired within a limited range.

The teleport staff functions mostly as a creative mode item. It cannot be obtained in survival mode. It also cannot it be crafted. In a future update, however, it is planned to be obtainable as a drop from one of the ogre bosses in the upcoming Ogre Lair dimension.

To use the teleport staff, use it on a solid block, and the player character will teleport to the desired location, consuming durability of the staff (if the player is in Survival or Adventure mode).

The staff has a maximum range of 128 blocks, and can teleport the player to the farthest cube seen in the view reticle.

Its use is is similar to that of an ender pearl, except the teleport is instantaneous because no projectile is thrown and the player does not receive any self inflicted damage from doing so. Also, there is no cool-down because the staff can be used again immediately prior to the last teleport.. After the player has been teleported, purple particles will appear from the staff.