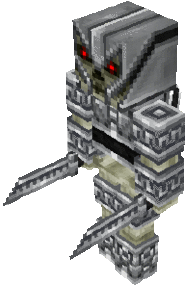 Silver skeletons spawn almost anywhere in the Overworld at a light level of 7 or less.

Silver skeletons drop 0–2 bones and have an uncommon chance to drop 0–2 silver swords upon death.

They drop 5 experience when killed by a player or a tamed wolf.

Silver skeletons spawn in dimly lit areas, and will burn in sunlight. When silver skeletons are nearby, their presence is indicated by the intermittent harsh rattling sound of their bones.

Like zombies and skeletons, silver skeletons will mount any nearby manticore, wild wolf, scorpion or horsemob.

Silver skeletons are undead mobs, and will take damage from splash potions of Healing, are healed with Harming potions, and are immune to poison. They burn at dawn when the sun is 15 degrees or greater above the ground, unless the skeleton is either in shade or water.

Upon noticing the player, a silver skeleton's speed will significantly increase at a pace faster than that of the player's walking speed. They use their silver swords to attack the player.

They are one of the few mobs with the ability to sprint, much like the player and zombie pigmen. They will climb stairs, navigate mazes, and traverse other complex obstacles in order to get to the player. Silver skeletons do not try to avoid being hit, though they will retaliate when hit by another hostile mob, such as when a skeleton shoots it when they are aiming for the player.

Silver skeletons, like other hostile mobs, are also able to climb ladders, but only when forced to, as their AI does not handle ladders in a special way.