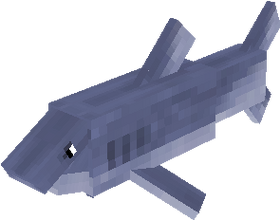 Sharks are aggressive water mobs that can be tamed.

Sharks spawn in any body of water that is at least 2 blocks deep and around 6-8 blocks wide/deep.

Sharks are 0.5 blocks wide and 3 blocks long at first, but can grow up to 1 block wide and 6 blocks long.

When killed, sharks will drop 0-3 shark teeth (60% chance), and have a 10% chance to drop an egg. Looting does not affect the chance of the drops. Eggs can only be obtained if the difficulty is set to Easy or higher. They drop 1-3 experience when killed by a player or tamed wolf.

Sharks swim around aimlessly in the water, attacking any player within 12 or so blocks. They will also go for and attack squids, as well as dolphins, if attackDolphins is set to true in the config file. Sharks have high attack damage, and can kill an unprotected player in about three or four hits, depending on the difficulty. Sharks will not attack on Peaceful difficulty, and cannot attack players in boats. They will, however, still attempt to chase the player, even if they are in a boat.

Like other mobs that live in water, sharks will suffocate and die when out of water.

A shark can be tamed by hatching a shark egg in water, which will hatch into a friendly baby shark. Tamed sharks will not attack the player or other sharks.

A tamed shark can be moved with the use of a fish net. Sharks cannot be healed by feeding them, as there is no food item that they will accept. The only way to heal a tamed shark is to throw a splash potion of Healing or Regeneration at it.