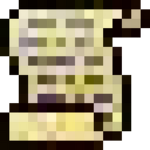 A scroll of sale is an item that the player can use to trade mobs between other players.