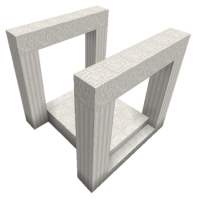 A quartz portal is a structure that generates in the Wyvern Lair.

The quartz portal generates automatically in the Wyvern Lair when the player arrives there for the first time, upon using a wyvern portal staff. It consists of all types of quartz blocks:

It is the only place where the player can get back to the Overworld without making a Nether portal or by dying. If you die in the Wyvern Lair and you lose your items, they will be lost. The only to retrieve them would be to go back with the wyvern portal staff.

As the quartz portal is the only place where you are able to get back to the Overworld, it should not destroyed or mined to get quartz blocks.