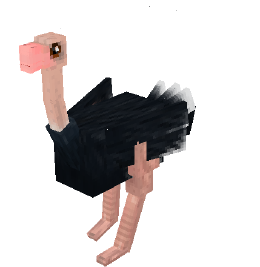 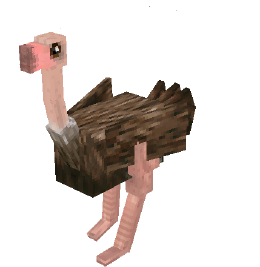 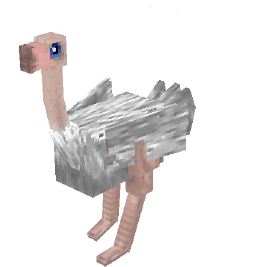 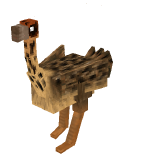 Ostriches are tall tamable mobs found in the Overworld.

Ostriches spawn on grass and in deserts at light levels of 9 or more with at least 2 block space above. They often spawn in flocks of 1-4 during world generation.

Flocks can either come with males, females or chicks. There is a small chance of an albino ostrich spawning. 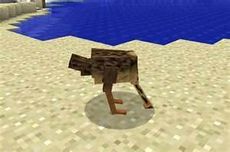 Female ostriches and chicks will stick their heads in the ground if attacked.

Male ostriches are neutral, and females and chicks are passive. Males will only attack when hit. If a chick or female is attacked, they will panic, run around randomly and stick their heads in the ground. Tamed ostriches do not react to being hit. Ostriches emit screams when they are hurt and/or die.

Prior to v6.3.1, female ostriches could lay eggs occasionally. If the egg was picked up by the player, both the male and female ostrich would chase and attack the player.

Ostriches can be 'bred', though only one ostrich needs to be fed, not both of them. The player needs to pair a wild male and female ostrich together and give the female ostrich a melon seed. Unlike other breedable mobs, no love hearts will be shown and no baby mob will appear. After a female ostrich has been fed a melon seed, it will take a few minutes for an egg to appear. When the egg appears, an in-game message will notify the player that the egg will hatch soon. When it does, the egg can be picked up, otherwise the chick will hatch wild.

Prior to v6.3.1, ostriches could be bred by leaving a male and female ostrich a few blocks away from each other, it didn't matter if there were any other mobs nearby. After a short period of time, an egg would then appear. The baby ostrich that hatched would not be tamed unless the egg was picked up and hatched by the player. 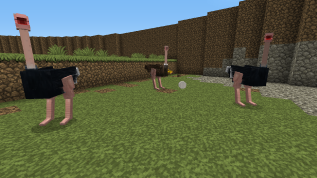 A group of ostriches along with an ostrich egg.

Feeding an ostrich an essence can cause it to transform. The table below lists the effects of the various essences ostriches will take.

To feed an ostrich, hold a valid essence and right click on the ostrich.

Equipment can be placed on a ostrich by right clicking on the ostrich, or by accessing its inventory by Sneaking.

A helmet can be placed on a tamed ostrich to reduce the damage it receives. An ostrich can wear leather, gold, iron, diamond, fur, hide, reptile hide, or scorpion helmets. The only helmets ostriches cannot wear is chain helmets. If an ostrich is given a dyed leather helmet, the colour will not show, and the dyed helmet will return to normal if the helmet is removed.

All the 16 available colors of wool can be used on an ostrich to give it a flag. For example, giving an ostrich red wool will give it a red flag. If the ostrich is given a different color, the flag will change color again and the previous wool will be dropped.

To add a flag, right-click on the ostrich. It must already be tamed and have a chest, although a saddle is not required.

Ostriches can be equipped with a chest to give them 18 slots of inventory space.

An ostrich's inventory can be accessed by sneaking and right-clicking on the ostrich.

When an ostrich has been given a chest, an empty flag pole will be placed on the chest, so that a flag can be added.

A saddle or crafted saddle can be placed on an adult ostrich so it can be ridden. Ridden ostriches can be controlled with the standard directional controls, jump and the mouse. Pressing and holding jump will allow the ostrich to fly, but this only works on wyvern and nether ostriches, and it can be difficult to control them in mid-air.

Like other mounts, the hunger bar is replaced by the ostrich's health in survival or adventure mode. It uses a slightly different heart texture than the player's health bar.

A whip can be used when riding an ostrich to give it a short speed boost. Using a whip when not riding it will make it remain stationary and have its head in the ground. If used again, the ostrich will pull its head from the ground and will be able to move again.

A medallion, book or name tag can be used to rename a tamed ostrich. 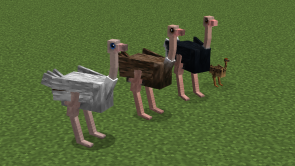 The four natural types of ostriches.

There are four special variants of ostriches that can be created by giving a tamed ostrich a certain essence. After an essence has been fed to an ostrich, it can be used with another essence to be changed again.