Mobs are living, moving game entities. The term "mob" is short for "mobile".

The Mo' Creatures mod adds over 50 new mobs to Minecraft. The mod focuses on interacting with and taming the creatures that the mod provides. Each mob in Mo' Creatures is either passive, neutral or hostile, and some have advanced AI, which of course depends on the player's presence.

Mobs come to exist by spawning in many ways. Most will spawn naturally, dependent on the light level and biome, often times in groups with mobs of the same variety. Some mobs also have the ability to breed. Mobs will not naturally spawn on transparent blocks, in water (except for sharks, dolphins, small fish, medium fish, fishies, stingrays, jellyfish and manta rays), in lava, or on half blocks (slabs, stairs). The exception is monster spawners, from which they can spawn naturally on any block including air.

Players can also spawn mobs by using spawn eggs in Creative mode, or the /summon command after enabling cheats.

A big golem about to throw one of its blocks at the player.

Mobs are affected by the environment in the same ways as the player: they are subject to physics, and can be hurt by the same things that harm the player (catching on fire, falling, drowning, attacked by weapons, etc.). Some mobs may be resistant or immune to certain hazards, such as hellrats, fire ogres, and nightmares which are immune to fire. Mobs can ride minecarts and other mobs, and can climb up ladders. When mobs are killed, they turn to dust and drop items which may be useful resources.

Each type of mob in Mo' Creatures has a certain AI (Artificial Intelligence) system with different behaviors and mechanics. Mobs will ordinarily wander around at random if there is a player nearby and usually avoid walking off blocks high enough to cause falling damage. Many mobs have an advanced pathfinding system that allows them to traverse complex mazes to get to a desired object or destination. Passive mobs will flee in random directions after being hurt, while hostile mobs will face and chase/attack the player as soon as they come close. Some passive mobs, such as turtles and deer, are shy and flee from entities when approached. Neutral mobs, such as snakes, will remain neutral until a player or mob provokes it (usually by attacking), at which point it will turn hostile toward and attack the entity that hit or get too close to it. Most mobs are aware of players within 12 or 16 blocks away.

Mobs can not see through most solid blocks, including semi-transparent blocks such as ice, glass, or glass panes. Mobs will not attempt to walk on rail tracks, unless pushed on by other mobs.

Some hostile mobs can ride several Mo' Creatures mobs in the same way players can. This includes silver skeletons, zombies, zombie pigmen or skeletons riding on horsemobs, wolves, manticores and scorpions. When mobs are killed, they drop various items which may be useful to the player for use in many crafting recipes. Some mobs can also only be found in certain biomes, such as mammoths, frost scorpions and polar bears, which can can only be found in "snow" biomes.

Other mobs have more advanced AI, and as a result, have more complex behavior. This includes scorpions stinging the player if the/she get too close, ogres destroying blocks within close range of the player, or golems using blocks as a projectile. Big golems can form their body from blocks in the surrounding environment, making them a formidable and challenging enemy. Mini golems will simply throw a block at you, however, and are not considered very dangerous. 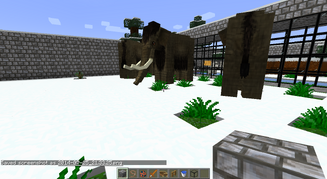 Mobs can be tamed in many ways, such as catching aquatic mobs (like fish or crabs) with a fish net or by hatching eggs. Some mobs can be transformed with the use of essences.

Mobs can be transported, and can be placed from one area to another with the use of amulets.

Although not technically mobs, litter boxes, kitty beds and eggs are subject to the same physics as other mobs in Mo' Creatures. Kitty beds and litter boxes however, cannot be burnt, poisoned, suffocate or drown etc., but can still be deleted from the world by falling into the void.