Mo' Creatures is a Minecraft mod that was made by DrZhark. It provides many new animal and monster mobs, as well as the ability to tame and ride some.

The Mo' Creatures mod adds a variety of over 50 new mobs to Minecraft. The mod focuses on allowing the player to interact with and tame new creatures. Each mob in Mo' Creatures is either passive, neutral or hostile, and some have advanced AI, which of course depends on the player's presence.

Some activities in the mod include fighting hostile mobs, crafting new blocks and tools by gathering various resources found in the mod, taming mobs and being able to ride them, equipping them with chests and armor, and providing many useful ways of transportation throughout the Minecraft world.

A Wyvern Lair log, one of the exclusive blocks that naturally generate in the Wyvern Lair.

The four types of bears in Mo' Creatures. 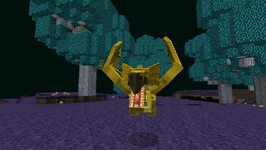 A wyvern about to attack the player in the Wyvern Lair.

The Mo' Creatures mod adds about 59 mobs to Minecraft. These mobs include four types of bears, nine types of insects, several fish, and many more.

There are four types of bears: polar bears, black bears, grizzly bears and pandas. All four of these mobs are tamable, can breed, ridden with a saddle, and wear a chest to store your items. Grizzly bears and black bears are neutral in the day or when they are not hungry. They will become hostile at night or if you attack them. Polar bears will attack the player on sight, and pandas are passive and attracted to sugar canes.

The nine types of insects include ants, bees, butterflies (and moths), crickets, dragonflies, fireflies, flies, maggots, and roaches. Many insects have unique behavior. For instance, butterflies and flies will sometimes follow the player if they are holding flowers or rotten flesh, moths are attracted to torches, and ants will pick up and carry food items. Most insects have the ability to fly, though ants and maggots cannot.

The Mo' Creatures mod has many weapons to offer, including the shark sword, which is made from shark teeth (a common drop of sharks) and sticks. The silver sword, a powerful but short lived weapon obtained from silver skeletons. This sword is very useful for slaying werewolves, as it is their only weakness (before this sword was added, their only weakness was a gold sword).

There are also four unique weapons; the sai, katana, nunchaku, and the bo. They can be obtained by killing a tamed turtle that has been named after one of the four Teenage Mutant Ninja Turtles: Donatello, Michelangelo, Raphael, and Leonardo.

Other unique weapons include four types of scorpion swords. These swords have special properties that vary depending on the type of sword: the dirt scorpion sword poisons the mob or player when hit, the cave scorpion sword causes nausea, the frost scorpion sword slows players and mobs down, and the nether scorpion swords sets you or mobs on fire. These effects usually last for about 6 seconds. These swords are made from scorpion stings, an uncommon drop of scorpions. While these swords can be useful in survival mode or when you're out on an adventure, their durability doesn't last very long and a diamond sword and three of the stings is required for crafting them to craft them.

A few tools are included in the mod. The teleport staff, builder hammer, and fish net.

The teleport staff is a mostly creative mode item that allows the player to teleport within a 128 block range. Unlike ender pearls, the player can teleport with the staff instantly and no self-damage is inflicted to the user. It does however, have a limited durability when used in survival or adventure mode.

The builder hammer, like the teleport staff, is another creative mode item that can be used to place blocks from a distance that otherwise would not be possible to be placed normally, and can be useful for building projects. Blocks can be placed from a maximum distance of 128 blocks, and the player can place blocks anywhere within the view reticle. The block placed by the hammer is the first block in the player's inventory. The hammer can also place non-solid blocks such as mushrooms and flowers.

The fish net is a useful tool for catching mobs that live in water, and can be used to transport a mob from one body of water to another. It can catch and tame crabs, dolphins, jellyfish, manta rays, medium fish, sharks, small fish, and stingrays. Like amulets, the net will store the mob in the net until it is released by its owner.

A player wearing a full set of dirt scorpion armor.

This mod adds several armor sets that can be worn by the player. Most, if not all armor sets have the same durability as iron armor. Like Minecraft armor, it takes 24 pieces of these items to craft a full set.

Horse armor used to be in this mod, but it was removed and added to Minecraft instead. This included iron horse armor, gold horse armor and diamond horse armor. They can still be placed on horses and wyverns, despite being a Minecraft item. Another armor designed for horses, crystal mount armor, can be worn by special horses, such as pegasus, unicorns, and fairy horses.

There are two Easter eggs in Mo' Creatures that have references to real-life media.

Naming a turtle after one of the Teenage Mutant Ninja Turtles (Donatello, Leonardo, Michelangelo, or Raphael) will have that turtle don a headband and it will have a weapon on its back.

The second Easter egg is dancing, or "shuffling" zebras. If a music disc is fed to a tamed zebra, the player will receive a zebra record in return. This record plays a loop of LMFAO's Party Rock Anthem when played in a jukebox, and any tamed zebra near the jukebox will start to shuffle accordingly. 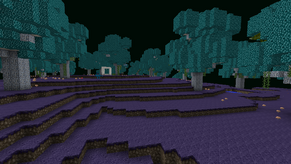 There is currently one dimension in Mo' Creatures. The other dimension, the Ogre Lair, is still planned for a future update.

The Wyvern Lair is a dimension in Mo' Creatures, accessible with the use of a wyvern portal staff. It is the only place where wyverns spawn and can be found naturally. It is also home to other mobs such as snakes, bunnies, and insects.

Upon arrival in the dimension, the player will be in a forest of peculiar looking trees. The player will spawn on a structure made out of quartz blocks. This structure is the only way that the player can get back home with the use of the portal staff.

The Ogre Lair is a planned dimension that is still in development. It is currently not accessible, and in a future update, three ogre bosses are set to spawn in the dimension, along with ogres.