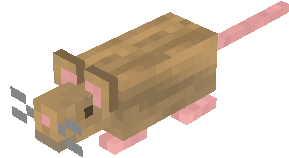 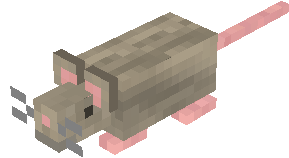 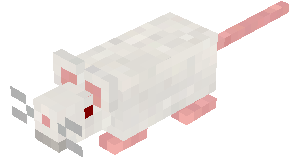 Mice are small passive mobs that flee from other entities.

Mice naturally generate on grass blocks with 2 blocks of free space above it at light level of 9 or more. Mice will always be white in snow biomes.

The size of a mouse is somewhere between 1 to 1.3 blocks in length.

When killed, mice drop 0–2 seeds. The drops are affected by the Looting enchantment. They drop 1–3 experience when killed by a player or tamed wolf.

A player holding a mouse.

Mice are passive, and will never attack mobs or players, but instead flee and run away from said entities when approached. They have the ability to automatically scale up solid blocks, including fences. This can lead to them suffocating in ceilings or the corners of blocks. Due to their small size, they can pass through openings even smaller than a full block, though not willingly. Mice make squeaking noises occasionally.

A mouse can be picked up with a right-click, and can be dropped by right-clicking again. If you hold a mouse near a snake, it will follow you and attack the mouse when dropped, as snakes hunt down mice.