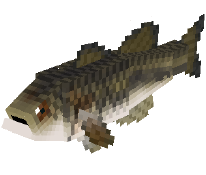 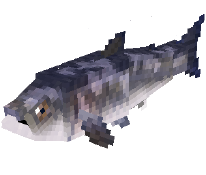 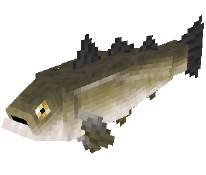 Medium fish are tamable aquatic mobs. There are three variants: bass, cod, and salmon. Each variant has their own spawn egg.

Medium fish can be found in oceans and rivers, in any light level.

When killed, medium fish will drop :

Like small fish (except piranhas), fishies and manta rays, medium fish are always passive towards the player. They swim around almost immediately when first spawned into the world and wander around aimlessly in the water. If the player approaches a medium fish, they will swim away. Medium fish will also swim towards fishing rod hooks, and can be reeled in this way.

If a medium fish is not in water, it will start taking suffocation damage after about ten seconds and eventually die. When on land, they will 'hop' into the air from taking damage and stay stationary until they suffocate.

Medium fish can be tamed by catching them with a fish net, or by hatching their eggs in water. With a fish net, use it on any medium fish, and the net will catch the fish, which will then appear in your inventory. After being released from a fish net, the naming screen will appear and the fish will be tamed. Eventually, tamed medium fish will grow up to be around 2 to 2.5 blocks long.

Medium fish will spawn using one of three different skins. Skins include brown with a white underside and two dorsal fins (bass), brown with spots on the dorsal side (cod), and blue with visible spots (salmon).