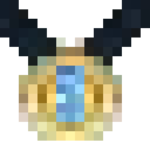 A medallion is an item the player can use to rename a pet.

Medallions function similar to that of name tags, except that they don’t need to be used at an anvil for them to have a custom name. Instead, the player can simply use a medallion on a mob to choose a desired name for it. Medallions will only work on certain Mo' Creatures mobs, and not mobs from Minecraft. Once the mob has been named with a medallion, it will become the player's owner.

Medallions are also requied for taming big cats, kitties, and manticores. They can be given a medallion once they have been fed (raw fish or raw porkchops for big cats and manticores, and cooked fish for kitties).

When a mob has been renamed with a medallion, it is not consumed from the player's inventory. This will only occur when taming a big cat, kitty, or manticore. Also, when a medallion has been used to name a creature, it will display love hearts to its owner, to confirm that it has been renamed.