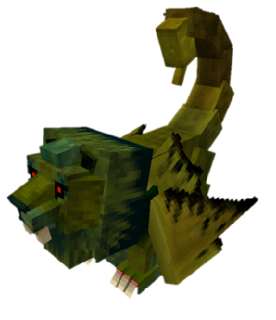 Manticores wander and fly around aimlessly, roaring occasionally. Manticores will notice the player from a 12 or 16 block radius, and will sprint or fly towards the target to attack.

Manticores have the combination of a big cat's high attack damage, the sting of a scorpion, and can also fly, making them a challenging threat for an unprepared or inexperienced player. Wild manticores will attack other mobs, including big cats. Big cats will retaliate against attacking manticores, which can lead to a fight. Zombies, skeletons, silver skeletons and zombie pigmen can ride on wild manticores.

Like other hostile mobs, wild manticores do not spawn on Peaceful, and despawn when the difficulty is changed to Peaceful.

To prevent the loss of pets, keep your manticore or wild manticores away or in an enclosure, separated from big cats or other mobs that they may attack. If the "AttackWolves" setting is set to "true" in the config file, manticores will attack wolves, including tamed wolves.

To get a tamed manticore, obtain a manticore egg, which can be retrieved by killing wild manticores. Place it on the ground, step a few blocks away from the egg, and it will hatch into a friendly baby manticore. To rename your tamed manticore, right-click on it with a medallion, name tag or book.

Tamed manticores can be healed with raw fish or raw porkchops. You can either right-click on them with it to feed them, or throw it on the ground and they will eat it. They can be healed this way. It is also possible to heal them with dispensers by placing raw fish/porkchops inside of a dispenser and then connecting it to a redstone clock. Manticores can also heal themselves by killing pigs or boars, as they can recover health from the porkchops they drop.

Manticores can take several in-game days to grow, but once they are fully grown, they can wear equipment. Manticores can be healed by feeding them raw fish and raw porkchops, you can also throw the meat at them and they will go after it. Like other tamable mobs, you can make a manticore sit by right-clicking on it with a whip. Manticores can also be leashed without protest.

Manticores can be generally considered to be one of the fastest means of transportation in Mo' Creatures. They also have the ability to fly, which can be useful if you want to travel far distances.

Once a manticore is tamed and saddled, the player can control it with standard directional controls, jump, and the mouse. The player dismounts using the dismount control, and descends using the descend key.

A player can use any item while riding a manticore, including drinking or throwing potions; activating doors or redstone devices; using chests, crafting tables, and furnaces; breaking and placing blocks; and attacking with melee weapons or bows.

A ridden manticore will automatically run up any one block high slope. They can also run and fly relatively fast, and are much faster than pegasus or fairy horses. They can even be combined with speed potions. A ridden manticore can be made to jump, and holding the spacebar key will allow the manticore to fly, and the Z key can be used to make it descend.

A tamed manticore can be renamed with by right-clicking on the manticore with a medallion, name tag or book.

The four natural types of manticores.

Manticores will typically spawn using one of four different skins. These include green, snow, fire, and black.

The biome determines the skin used: