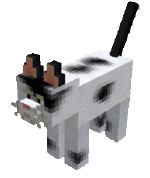 Kitties are tamable mobs found in the Overworld.

Kitties spawn on grass blocks at light levels of 9 or more with a minimum of 2 block space above. They often spawn in groups of 4 during world generation.

Kitties drop 1–3 experience when killed by a player or tamed wolf. If the kitty was tamed, it will drop a medallion.

An angry kitty attacking the player.

A wild kitty can be tamed by dropping cooked fish near it and stepping a few blocks away until the kitty eats it. After the kitty eats the fish, right-click on it with a medallion. Tamed kitties can be healed with cooked fish, cooked salmon, or cake. A whip can be used to make a kitty sit; it will not move until right-clicked again.

A tamed kitty requires frequent care and attention. A kitty will become aggressive towards the player if they don't find a kitty bed that has been filled with pet food or milk, but eventually its temper will improve. Kitties that are hungry emit loud meows and show a food emoticon, indicating that they want to be fed. An angry kitty will hiss and show an angry emoticon over its head.

Before ropes were removed, kitties could be picked up by their feet. The kitty would become aggressive to the player once it was released.

Kitties are attracted to wool balls. If the player uses a wool ball on a tamed kitty, it will begin chasing and pushing it around, until it gets bored. When the player is carrying the ball, a kitty near the player will be curious and show a question mark above its head.

For a kitty to breed, the player needs to use cooked fish or cake on a tamed kitty. After being fed, the kitty will look for another kitty that has also been given cake/cooked fish. Kitties that are both in love mode will both show a heart emoticon and will purr at as well as 'paw' and circle each other. Also, like many mobs, kitties do not have genders. After a while, the kitty that was bred first will become pregnant and will need to find a kitty bed. After a short period of time, the mother will give birth to a litter of 1-4 kittens.

Like bunnies, kittens do not always share the same markings as their parents. Kittens can be named in a similar matter to adult kitties by right-clicking on them with a book or a medallion. Kittens make high pitched meows and are very playful. They will chase any item, will play with you, and follow their mother. If a kitten is attacked, its mother will defend them.

There are 14 emoticons that kitties can show to let the player know how it is feeling, as seen below.