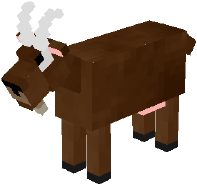 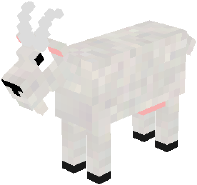 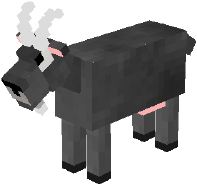 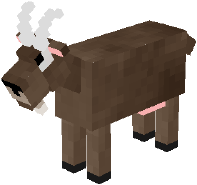 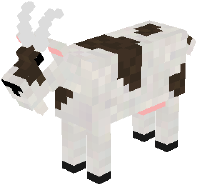 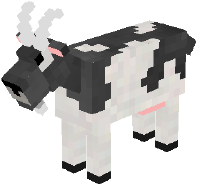 Goats spawn on grass blocks at light levels of 9 or more with at least 2 block space above. They often spawn in groups of 4 during world generation, which includes males, females and kids.

Goats drop 0–2 leather and 1–3 experience when killed by a player or tamed wolf. 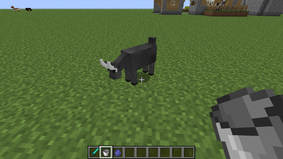 A male goat lowering its head after attempting to milk it.

Male goats are neutral, and female goats and kids are passive. If a male is provoked, or if the player attempts to milk it with an empty bucket, it will ram them back with its horns, producing a minuscule knockback effect. Unlike other neutral mobs, which usually remain hostile after being hit, male goats will usually attack a few times, stop attacking and then turn neutral again. Female goats can be milked by using an empty bucket. Goats can be heard bleating occasionally, with females and kids emitting different bleats.

Goats are attracted to item entities floating on the ground, and will eat any item, including blocks, diamonds, weapons, and tools, Goats cannot eat experience orbs. It's recommended to keep your valuables in a chest to keep them safe from goats.

A goat will follow the player if they have any edible item in hand.

Male goats will fight between themselves, but they don't take damage from doing so. This is characterized by the goats lowering their heads, stamping their feet, and raising their tails. They will then charge at one another and knock each other back. When a goat gets knocked back by another goat, it is possible for one to get knocked over a fence, so a higher wall or separation of males would be suggested for containment.

A goat can be tamed by feeding it any edible food item (even golden apples, though they experience its effects), and even food that would usually cause negative effects, like rotten flesh and spider eyes. When the naming screen appears, the goat has been tamed. To change a goat's name, right-click on it with a book, name tag or medallion. To heal a hurt goat, feed it with any edible item. Goats can also be leashed, but the goat will eat the lead if it breaks.

Tamed goats will not attack the player if provoked, but males will if you attempt to milk them.

Even though there are both male and female goats, they cannot be bred.