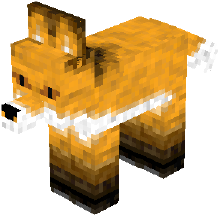 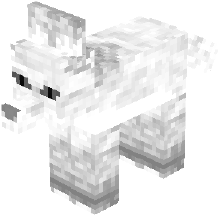 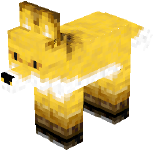 Foxes are tamable mobs found in the Overworld.

Foxes spawn on grass blocks at light levels of 9 or more with at least two block space above, and Arctic foxes spawn in snow biomes. They often spawn in groups of 4 during world generation. Cubs may also spawn with adults.

Foxes will drop 0–2 fur upon death. The drops can be increased with the Looting enchantment. They also drop 1 to 3 experience when killed by a player or tamed wolf.

Foxes are neutral, and will attack the player if provoked, or any mob that attacks them. They give chase and hunt down insects, kitties, birds or any other mob smaller than them. Foxes make high pitched squeaks when hurt or killed. Fox cubs are passive, and will flee from players and follow adult foxes. It takes at least one full Minecraft 'day' or more for fox cubs to mature. The appearance of cubs is roughly similar to that of an adult fox, having the same sized heads and bodies. Fox cubs will stay around their parents until they mature, although the parents do not protect the cub(s) from harm.

Larger mobs will occasionally target and attack foxes. In turn, the fox may fight back and fight the other mob.