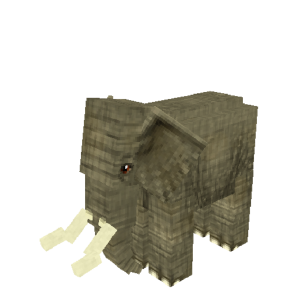 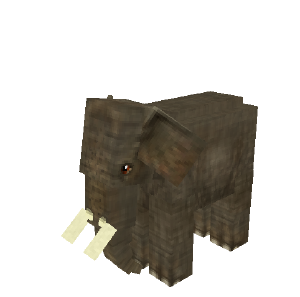 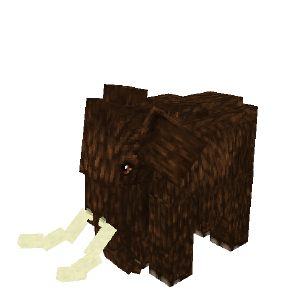 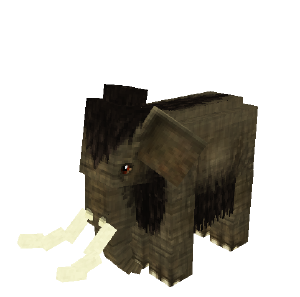 Elephants are large neutral mobs that can be tamed and given various items.

Mammoths are larger variants of elephants.

When killed, elephants and mammoths drop:

Elephants and mammoths are tamed by feeding them ten sugar lumps or five cakes. This only works on calves; if the calf is an adolescent or has grown into an adult, it will not accept the food. When the calf has accepted the food items, the naming screen will appear and it will become tamed to the player. A tamed elephant or mammoth can be renamed with a book, name tag, or medallion, and can be healed with sugar lumps, bread, wheat, or baked potatoes. Once the elephant or mammoth has become fully grown, the player will be able to place equipment on it.

Despite not being very fast when it comes to speed, elephants and mammoths can still be useful nonetheless. They cannot fit through single or more block-wide openings due to their size, however. Elephants and mammoths are great when it comes to climbing up hills or mountains, as they can jump high enough to clear up to four or five block heights. They can also be given tusks to destroy blocks that are in their path, which can be useful for mining expeditions, gathering resources or clearcutting through forests. 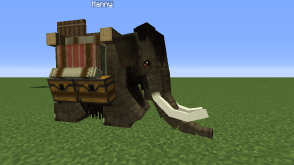 Unlike many other rideable mobs, elephants cannot be given a saddle. Instead, the player has to equip the elephant or mammoth with an elephant harness or mammoth platform. These items allow you to ride them.

The harness allows extra items to be added to the elephant or mammoth. Only one player can go on the harness, but a mammoth platform can carry up to two riders.

If a whip is used on an elephant or mammoth when riding it, they will gain a short speed boost, and will also ram into any mobs that are in their way.

An elephant chest can be given to an elephant or a mammoth by right-clicking on them with it. Like other equipment, chests can be removed with shears.

In multiplayer, elephants or mammoths wearing tusks will not destroy blocks by default. This is to prevent griefing.

The four natural types of elephants and mammoths.

The biome determines the skin used: