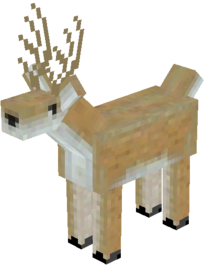 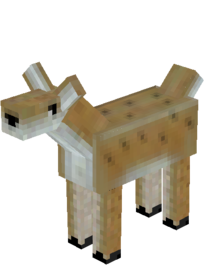 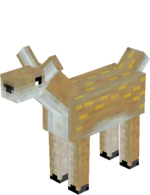 Deer are common passive mobs that spawn in the Overworld.

Deer spawn on grass blocks at light levels of 9 or more with a large block space above. They often spawn in groups of 2–4 during world generation.

There are three types of deer; males (stags), females (does) and babies (fawns). Males have large antlers, females have no antlers and a spotted coat, and baby deer have orange spots.

Deer will drop 0–2 fur upon death. They drop 1–3 experience when killed by a player or tamed wolf.

Deer act like most passive mobs; they will wander around aimlessly, avoid walking off cliffs high enough to cause fall damage, and usually stay out of water. They will panic and randomly run or jump around when attacked. Deer will run and jump away from mobs and the player when approached; they will run away from anything bigger than a chicken. Even though deer run away from players, they will not hesitate being leashed, and they don't act 'shy' when attached to a lead.

Deer can be very fast sprinters, and can jump at least two blocks high. They will jump around wildly to escape if placed in a fenced area. This can make them difficult to attack or trap.