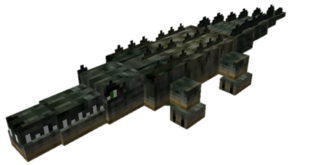 Crocodiles are aggressive mobs that can live in both water and on land.

Crocodiles spawn naturally in Swampland biomes, often in groups of 4. They will often spawn with random sizes.

When killed, crocodiles will drop 0–2 reptile hide and 1–3 experience. This can be increased with the Looting enchantment.

A crocodile using its death roll on a player.

Crocodiles often remain still, with their jaws agape. When not resting, they wander around aimlessly. They will become aggressive and attack the player and mobs on sight within a 12 block radius. They will still remain aggressive even when resting.

Crocodiles are semi-aquatic mobs, and can survive as well as swim underwater and not drown. This also means they can swim to get to the player.

Prior to DEV v8.0.0, if a crocodile had caught the player, they could try to get free by punching it, but not all of the hits would land.

This was the crocodile's "death roll", and once caught, it would try to drag the player into the water. The player could easily escape a crocodile by sneaking and 'dismounting' it. The death roll, however, has since been temporarily removed due to bugs.