Birds spawn on grass blocks at light levels of 9 or more with at least 1 block space above. They often spawn in groups of 2–4 during world generation.

Birds come in six different colors: blue, green, black, white, yellow, and red. Each type of bird comes with its own unique song.

Birds drop 0-2 feathers when killed. This can be increased with the Looting enchantment. They drop 1-3 experience when killed by a player or tamed wolf. 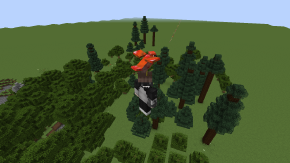 A player with a tamed cardinal on their head.

Birds are passive mobs, and tend to hop on the ground instead of walking. They wander and fly arond aimlessly, singing or chirping occasionally. They usually stay out of water, but if in water, they will try to stay afloat by flapping their wings. Birds are attracted to wheat seeds, and will eat any within a few blocks. If the player is harvesting wheat, any birds nearby will fly over to come and eat the seeds. There is a risk to an early harvest if the birds happen to trample on the crops . This can be prevented by having a tamed wolf, cat or other pet sit near the crops to scare the birds off, or building a roof over farms.

To tame a bird, drop seeds on the ground and then right-click on the bird after they have eaten the seeds, which will show the naming screen. Taming birds can be difficult to achieve, as it requires patience, and you will need to keep your distance so the bird can eat the seeds.

A tamed bird will go on the player's head when the player right-clicks on it. When on the player's head, the player can perform long-distance horizontal jumps (as if they had the Slow Falling effect) and also become immune to fall damage. If the player is riding a horse, wyvern or other mountable mob with a bird on their head, it will gain a massive speed boost and become very difficult to control.

Tamed birds can be healed with seeds, either by dropping seeds at the bird or right-clicking it.