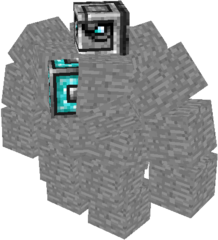 Big golems are hostile mobs that can form themselves with blocks and use them as weapons.

Big golems naturally spawn on the surface of the Overworld in light levels of 7 or less.

When a big golem dies, they will drop:

Note that the golem will not drop anything if they are killed with a bow, killed too quickly, or if the mobGriefing gamerule is set to false.

A big golem without any blocks. Note the diamond block core.

A big golem will begin to form its body and put up its shield if the player is within a 16 block radius, and will remain passive if the player stays out of its range. However, once a big golem has seen the player after it has formed its body, its search radius will be much larger, and is able to throw blocks at the player from quite a distance.

When a big golem notices the player, it will start to gather blocks in the nearby environment. When the golem forms itself with blocks, it first covers up its core, then it forms its arms and legs. The golem can walk around as soon as its knees are formed. The player can destroy the blocks on its legs, rendering it unable to move for a short period of time. If enough blocks are removed, its core will be exposed. But this can prove difficult, as the big golem will constantly try to acquire replacement blocks. Every time a block is acquired, the big golem is healed (the amount of the healing varies with the difficulty). If a big golem reaches 20

× 10 health points or less, its shield will turn orange, and eventually red, until it explodes.

As a big golem suffers damage, it becomes more dangerous. A hint of the danger level of the golem is the aura surrounding it. When a big golem forms its body, they will take any solid blocks from the surrounding landscape, which can result in the destruction of your home or other buildings. Big golems have a powerful melee attack, and also have a ranged attack, where the golem throws one of the blocks of its arms.

No matter how much damage your weapon deals towards a golem, a big golem's damage cap is always set at 5

In the yellow and orange stages, it will pick blocks out of its surroundings. When a big golem is attacked, there is a chance to destroy one of its blocks. The chance of destroying a block depends on the difficulty. If the core of the big golem is exposed, it will suffer damage.

After the big golem has taken sufficient damage and hasn't been killed afterwards, it's aura will begin to turn red and eventually, the big golem explodes.

Big golems can only be harmed with a melee weapon in the red stage. Sometimes however, when attacking, they will go back to one of the previous stages to recover its armor. Red is also seen in a big golem about to explode.